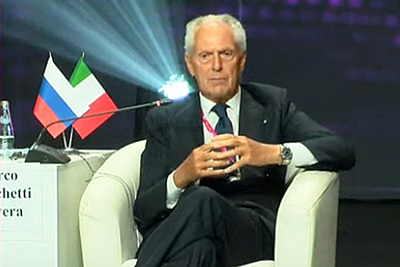 The XI International Industrial Exhibition INNOPROM-2021 was opened in Yekaterinburg on July 5. A delegation of the Russian Chamber of Commerce and Industry headed by the President of the Federal Chamber Sergey Katyrin took part in its work.

This year Italy was the partner country of the INNOPROM-2021 exhibition. It is officially represented by the country's Minister of Economic Development Giancarlo Giorgetti, with whom a large group of Italian politicians and entrepreneurs representing more than 70 companies arrived in Yekaterinburg. It is not surprising that it was Italy that acted as a partner country of the main industrial exhibition in Russia this year, said President of the RF CCI Sergei Katyrin. Italy is traditionally one of the key partners of Russia and one of the world industrial leaders.

The main session of the partner country “From flexible production to cooperation in high technologies. New Perspectives” brought together representatives of government and business.

Sergei Katyrin spoke during the discussion and answered on the sidelines to the questions from media regarding the interaction between Italy and Russia. The essence of his statements is as follows:

Italy is among the top five countries that invested in the Russian economy last year, and it is recovering its position as one of the main investors in the Russian economy after a sharp reduction in projects in Russia due to the pandemic. More than half of Italian investments were in the production of machinery and equipment.

The main achievement, according to Sergey Katyrin, is that over the long years of interaction between the two countries, trust has been established between the parties. This was once again confirmed recently, when agreements collapsed in a time of pandemic, when many obligations were violated. Therefore, Sergey Katyrin believes, there is a prospect of a general movement forward.

Today Italian companies are major investors in the Russian economy and important technology partners in many industries. Historically, today's cooperation was laid back in Soviet times, it is enough to remember the car plant in Togliatti, and not only it, Katyrin said.

Over the past few years, many large industrial projects have been implemented in Russia with the participation of Italian partners. Thus, together with the Italian company Nidec ASI, a plant for the production of high-voltage electric motors, JSC Russian Electric Engines, was built, a plant for the production of oil pumps, JSC Transneft Oil Pumps, was put into operation, together with Termomeccanica Pompe.

Italian-Russian trade is growing steadily, making up for the fall in 2020. A modest but significant increase in Italian exports in the first quarter of this year reveals prospects and opportunities for further growth, Katyrin said.

Answering the question on what is more important: human potential or high technologies and whether robots will replace humans, Sergey Katyrin said that, in his opinion, humanity will develop and artificial intellect will develop in parallel. Human potential cannot be replaced by anything, concluded the head of the Federal Chamber.

The exhibition is attended by representatives of Belarus, Hungary, Germany, Japan and other countries. Hundreds of Russian companies have set up their stands at INNOPROM. The exhibition will last four days.