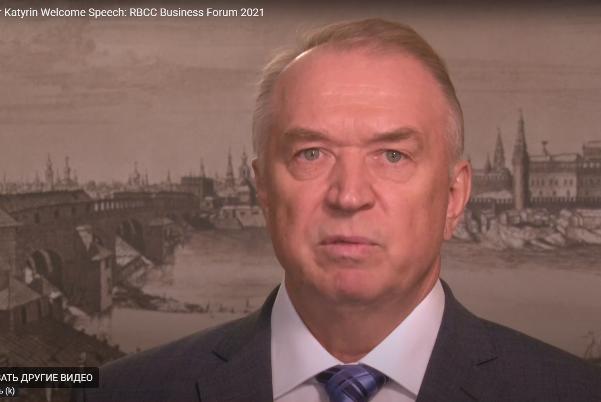 “The business community today is fully responsible for what the world will be like tomorrow and what the next generations will face. This will require the formation of a new business and social culture, the essence of which can be summarized as follows: development is based not only on competition, but also on effective cooperation and people”, said Sergey Katyrin, who spoke on June 30, 2021 with a televised address to the participants of the online forum Russian-British Chamber of Commerce “COP 26 - Opportunities for UK-Russia Interaction in ESG (Environment, Society and Governance)”.

Katyrin supported the initiative of the Russian-British Chamber of Commerce (RBCC) to include on the agenda of the bilateral dialogue issues of cooperation in the fields of climate and the environment protection. These issues in many ways are becoming pivotal. “This initiative is patriculary relevant in light of the upcoming UN Climate Change Conference in Glasgow, Scotland this November,” he said.

The President of the Chamber recalled that increasing number of developed and developing countries are now engaged in the law making in the field of climate change, the formation of an appropriate legislation, regulating systems and the improvement of the controlling greenhouse gas emissions. The President of the CCI stressed the importance of cooperation and exchange of best practices in environment protection. “We need balanced solutions that create conditions for further sustainable economic development. Dialogue is needed at all levels: experts, society, government, business, ” said Katyrin, stating that Russia cannot but respond to the defining “climate” initiatives of the main trading partners.

According to Katyrin, the prospect of introducing a border carbon levy is a matter of concern among Russian companies from the sectors of the economy that are sensitive in terms of their impact on the climate - the oil and gas sector, metallurgy, the coal industry and others. “In this regard, it is important that interaction in environmental issues be based on the principles of openness and transparency,” he stressed.

The head of the Chamber of Commerce and Industry said that in the structure of the Chamber, the Committee for Environmental Management and Ecology deals with low-carbon development. Katyrin thanked Prince Michael of Kent, patron of the RBCC, for his unwavering support for Russian-British activities and all initiatives aimed at developing bilateral business and humanitarian cooperation.