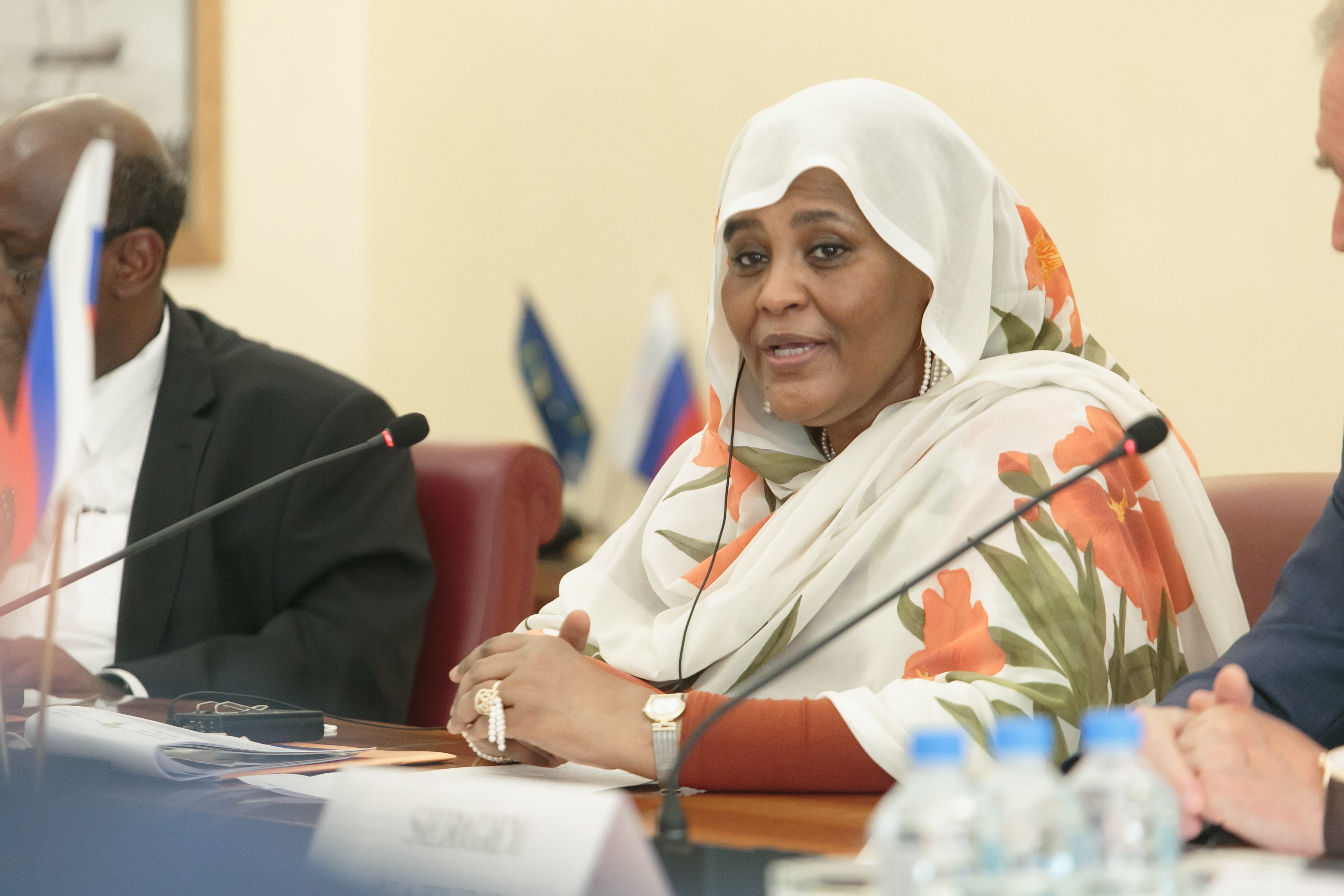 The development of economic and investment ties between Russia and the Republic of Sudan was the subject of a roundtable discussion between representatives of Russian business and the Minister of Foreign Affairs Mariam Al-Mahdi, held on July 13 in Moscow.

Sudan established the peace and our government is a government of peace that is open to peace and to cooperation with the Russian Federation, said Mariam Al-Mahdi. “We are looking at relations with Russia and Sudan is interested in development of infrastructure, building roads, airports, hydro electrical stations, mining”, - she said. “We start to establishing map of investment to Sudan”, said the Minister.

At the "round table" chaired by Sergei Katyrin, President of the Chamber of Commerce and Industry of the Russian Federation, Russian businessmen expressed their interest in working together with the Sudanese authorities and entrepreneurs.

"We believe that we have large reserves, huge potential for the development of our economic ties. Of course, we would like to take the opportunity of your visit with such a representative delegation, which is with you in Moscow, to talk about our economic ties. We, of course, prepared ourselves, organized the weather that is familiar to you. And we invited colleagues who are professionally involved in various industries, our Business Council, who could tell us about the development of these ties", Katyrin said at his opening remarks.

Speaking at the round table, Chairman of the Russian-Sudanese Business Council Viktor Chemodanov said that one of the notable Russian-Sudanese projects would be the creation of a high-speed tram in Khartoum, the development of production for electrical equipment, projects in the energy sector, as well as railway construction with a help of Russian companies.

One of the companies that would like to return to the Sudanese market, Sergey Katyrin named Zarubezhneft, which has extensive experience in Africa and the Middle East. Vladislav Vasiliev, Head of the Foreign Projects Department of JSC RusHydro (Hydroproject Institute), said that 3 hydro power stations (including hydropower station in Merov that is functioning 1300MgV) were designed on the territory of Sudan, the construction of which was interrupted due to the civil war, and RusHydro would like to return to this country.

Managing Director of the Department for Support of Operations in Financial Markets of Rosselkhozbank Sergey Mikhaltsov appealed to the head of the Sudanese Foreign Ministry with a request to assist in establishing contacts with Sudanese banks. The same wish was expressed by Sergey Smirnov, Director of the Department of Special Foreign Projects of Promsvyazbank, who expressed interest in establishing correspondent relations with the banks of Sudan.

Summing up the results of the meeting, Sergey Katyrin said that the biggest problem in the development of bilateral business relations is the lack of information from Russians about Sudan. “There is a wide range of businesses that are interested in information about Sudan and we could do much more in this area,” he said, expressing hope that the visit of the Sudanese Foreign Minister to Russia will give this a new impetus.