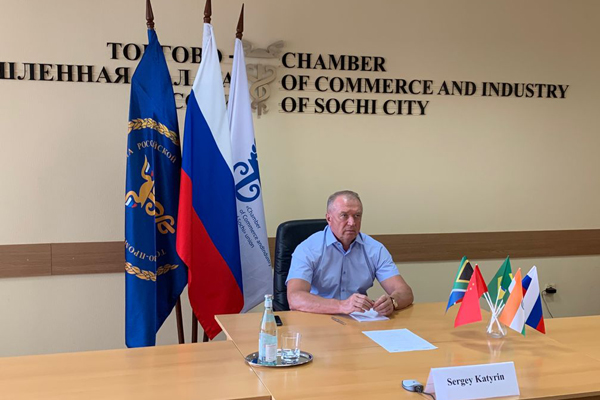 “The BRICS countries are the largest producers and consumers of digital products and services. The development of common standards for digital products will strengthen the position of BRICS in the international arena, and will also become an effective measure for the further development of our business," - said Sergei Katyrin, President of the Russian Chamber of Commerce and Industry, speaking at the plenary session of the BRICS Business Forum "Strengthening BRICS Business Cooperation for sustainable growth and development ".

The President of the Chamber stressed that the BRICS countries are interested in building a digital economy, infrastructure, exporting their products and solutions, ensuring national security, digital sovereignty, which has recently acquired particular importance. Katyrin, who acted as the chairman of the Russian part of the BRICS Business Council, named the following areas of cooperation:

Firstly, it is the exchange of experience at all levels on such aspects as regulation and standardization, personnel and education, information security, increasing export-import volumes in relation to digital services.

Second, these are unified digital standards. The BRICS countries are the largest producers and consumers of digital products and services. The development of uniform standards for digital products will strengthen the position of BRICS in the international arena, and will also become an effective measure for the further development of our business.

Katyrin called the development of a common position in the field of cyber security and the protection of personal data of their citizens by the BRICS countries "extremely important".

Katyrin noted the importance of creating a Single Information and Partnership Platform of the BRICS Women's Business Alliance. According to him, there is an opportunity to get access to the database of entrepreneurs from the countries of the "five", as well as their products. “Recommendations of the Alliance working groups and other summary information on their activities will be posted here,” he said.

“The platform will also provide access to information and educational content. The first version of the resource is planned to be presented by the end of this year, ”said the President of the RF CCI. According to Katyrin, this platform can become the basis for building partnerships among women entrepreneurs.

In January-June 2021, trade between Russia and the BRICS increased by almost 30 percent compared to last year and amounted to USD 70.6 billion.