AFROCOM Discussed Opportunities for Russian Business in Ethiopia and Djibouti
25.01.2022

In the Chamber of Commerce and Industry of the Russian Federation on Monday, January 24, a meeting of the Russia-Ethiopia-Djibouti forum was held, dedicated to the upcoming business mission to these countries, scheduled for February. The participants of the meeting, organized by the Coordinating Committee for Economic Cooperation with African Countries (AFROCOM), discussed in detail the preparations for the trip and the opportunities to be explored on the spot when visiting Ethiopia and Djibouti.

In his opening speech, a member of the Federation Council, Chairman of AFROCOM Igor Morozov stressed the importance of developing cooperation with these African countries.

The Russian senator said that the visit would be held jointly with the Russian Orthodox Church, which would open a set of cells on the site of the first Russian church mission that arrived in Africa in 1889. The meeting was attended by AFROCOM Executive Director Stanislav Mezentsev.

Director of the Institute for African Studies of the Russian Academy of Sciences, Corresponding Member of the Russian Academy of Sciences Irina Abramova addressed the forum participants with a greeting, recalling the 120-year history of Russia's relations with Ethiopia, which have never been built on the basis of unilateral gain or colonial conquests. According to the scientist, Russia is, as she put it, in the same boat with the countries of Africa and "we should unite forces for sustainable development."

Ms.Abramova expressed hope that before the 2nd Russia-Africa Summit, scheduled for 2022, a joint Russia-Ethiopian biological center will be founded.

“The upcoming 2nd Russia-Africa summit will be an event to which we must come with concrete results,” Ms. Abramova noted. The head of the Afrika Institute said that the continent is a promising market for Russia, in which it is important not to lose its positions, to maintain cooperation in the field of technology along with agriculture.

Ethiopia is a young, but large and densely populated country, where 60 percent of the population is under 25, Abramova said. "These countries are the key to the discovery of the African continent," the Corresponding member of the Russian Academy of Sciences believes.

Russian Ambassador to Ethiopia Yevgeny Terekhin, participating in the forum via videoconference, noted the positive changes taking place in this country, the growing investment attractiveness. The prevailing perception of Ethiopia as a country where war and devastation reigns, civil conflicts occur, speaks of the poor awareness of Russian business, which should be developed, the head of the Russian diplomatic mission emphasized. As an example, he cited the possibility of exporting flowers from Ethiopia to Russia, which is now carried out mainly through the Netherlands.

Russian Ambassador to Djibouti Mikhail Golovanov drew the attention of the forum participants to the attractiveness of this country in terms of its geopolitical position. He pointed out that 12 per cent of the world's maritime traffic takes place through the ports of Djibouti. Every year this country receives 33 thousand ships and provides ample opportunities for operators. The country has created good conditions for business activities, built high-tech offices and warehouses, built the first fully electrified railway in Africa with a length of 750 kilometers, which connects Djibouti and Addis Ababa, the capital of Ethiopia.

Ethiopian Ambassador to Russia Alemayehu Tegenu thanked AFROCOM for its support and cooperation and expressed hope for further joint work. The speech of the representative of the Embassy of Djibouti in Moscow was devoted to the tourist attractiveness of this country and its extraordinary natural sites. She said that foreign banks are widely represented in Djibouti and fixed exchange rates have been established that have not changed for many years, a developed system of ports and container terminals has been created that connect the countries of Europe, Asia and the Middle East.

By Petr Cheremushkin, Press Service of the Chamber 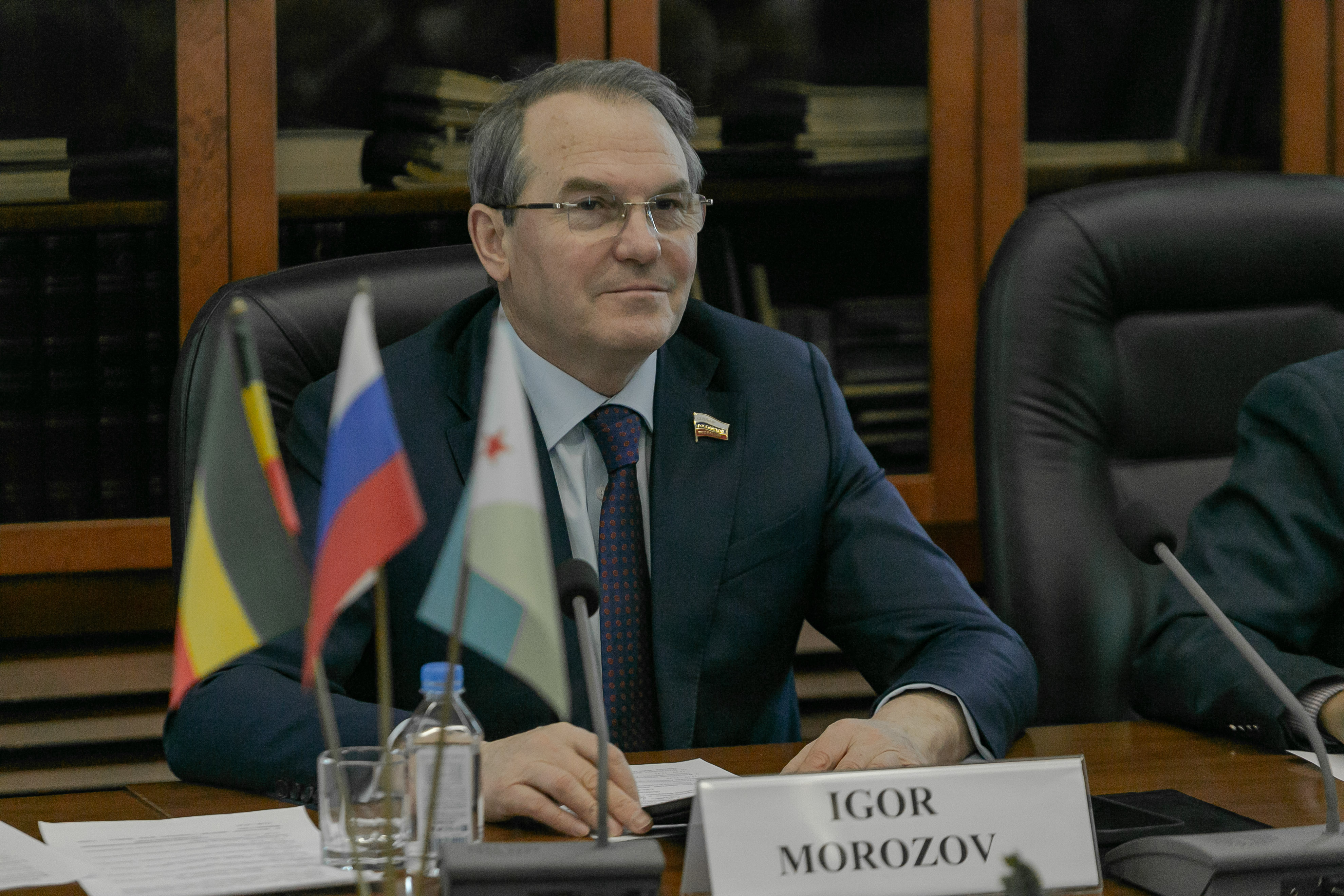 Igor Morozov, Chairman of the AFROCOM 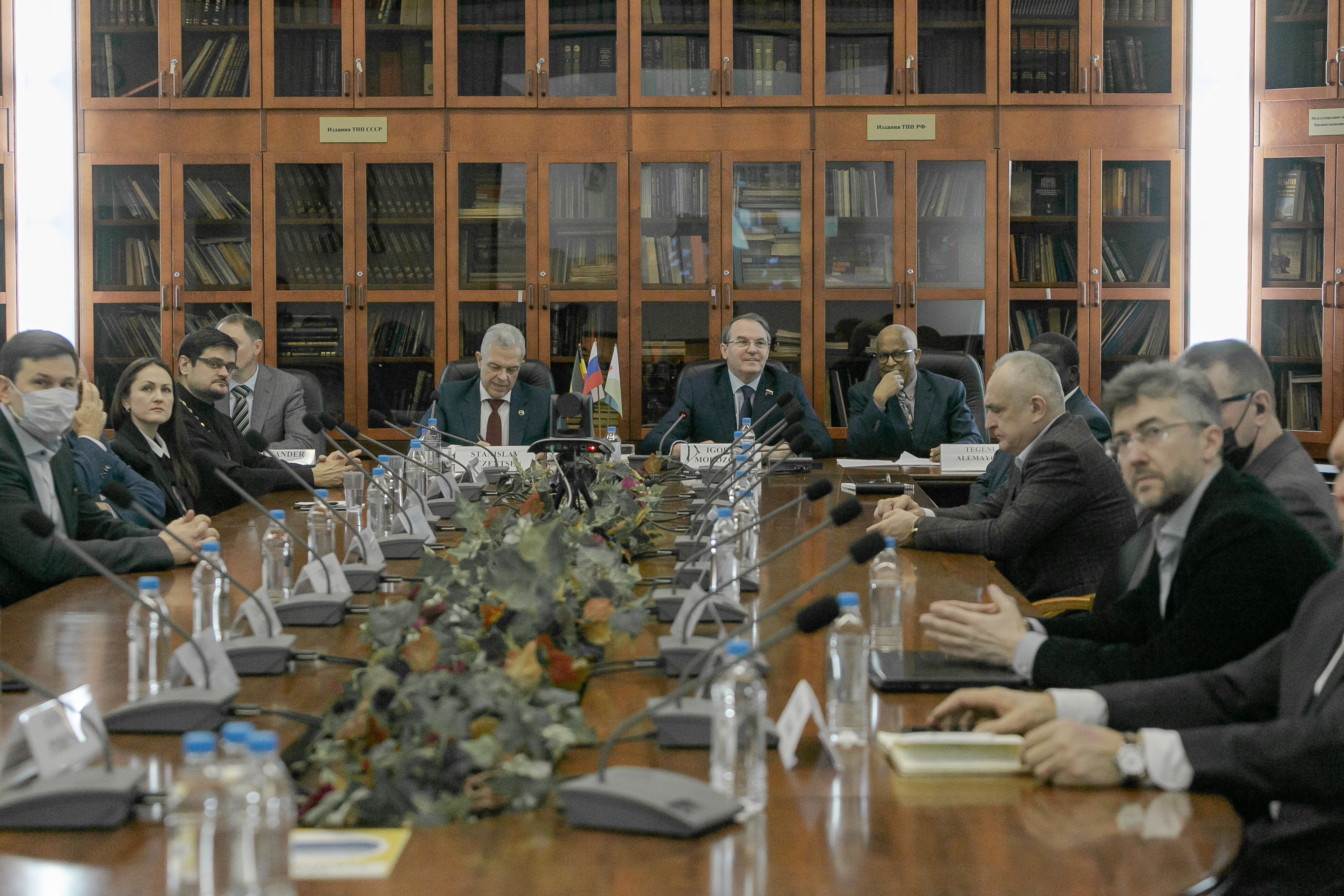 At the meeting of AFROCOM 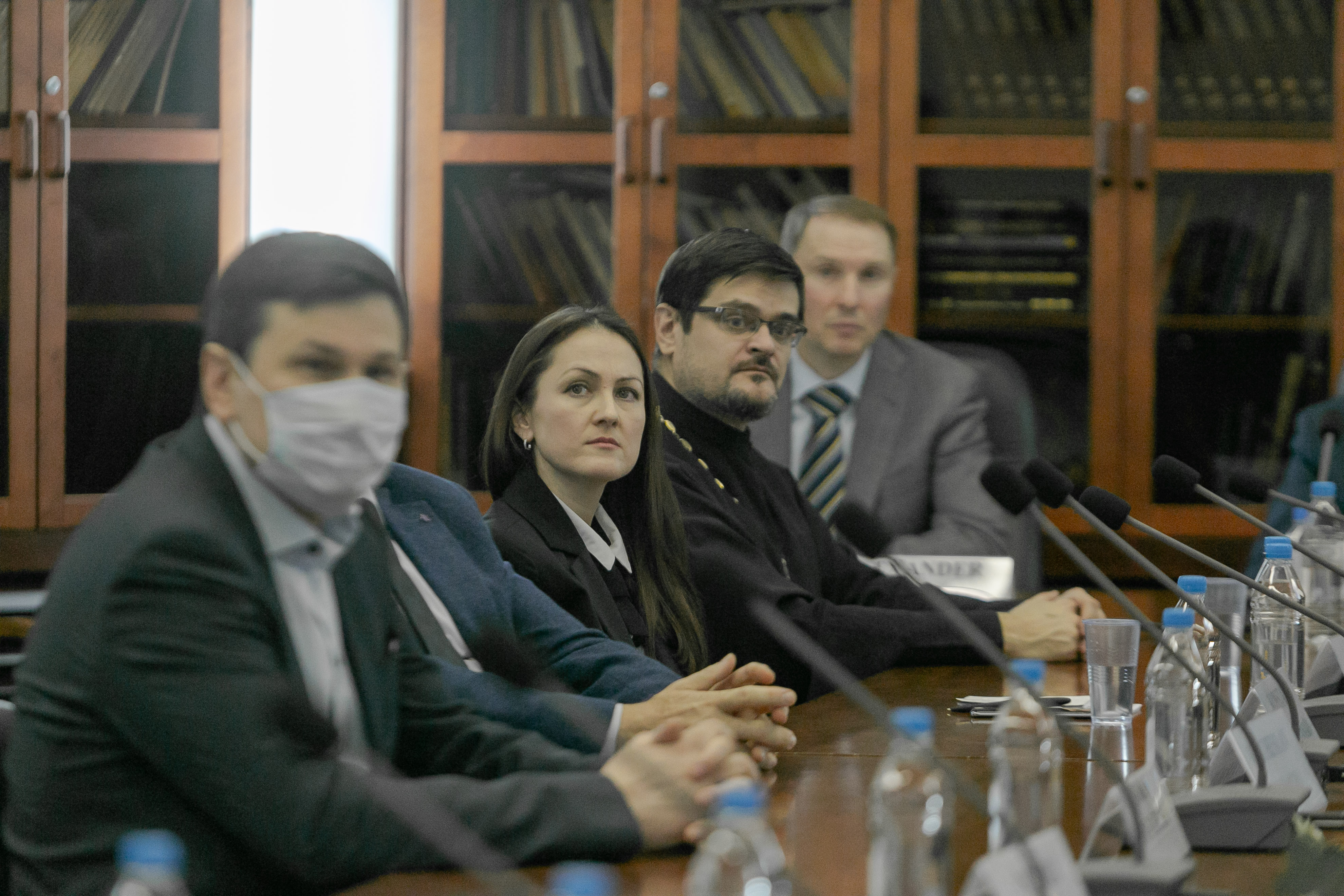 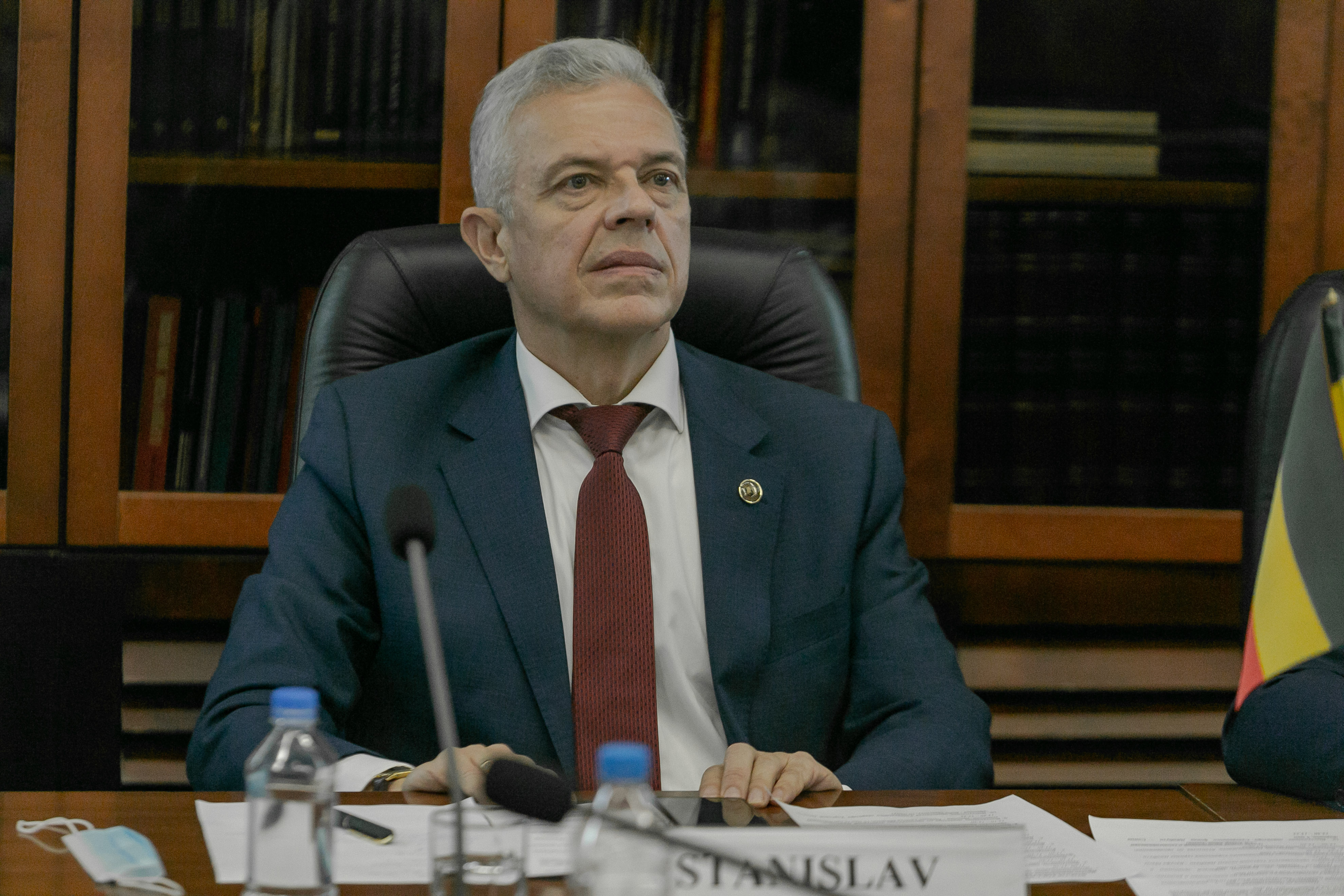 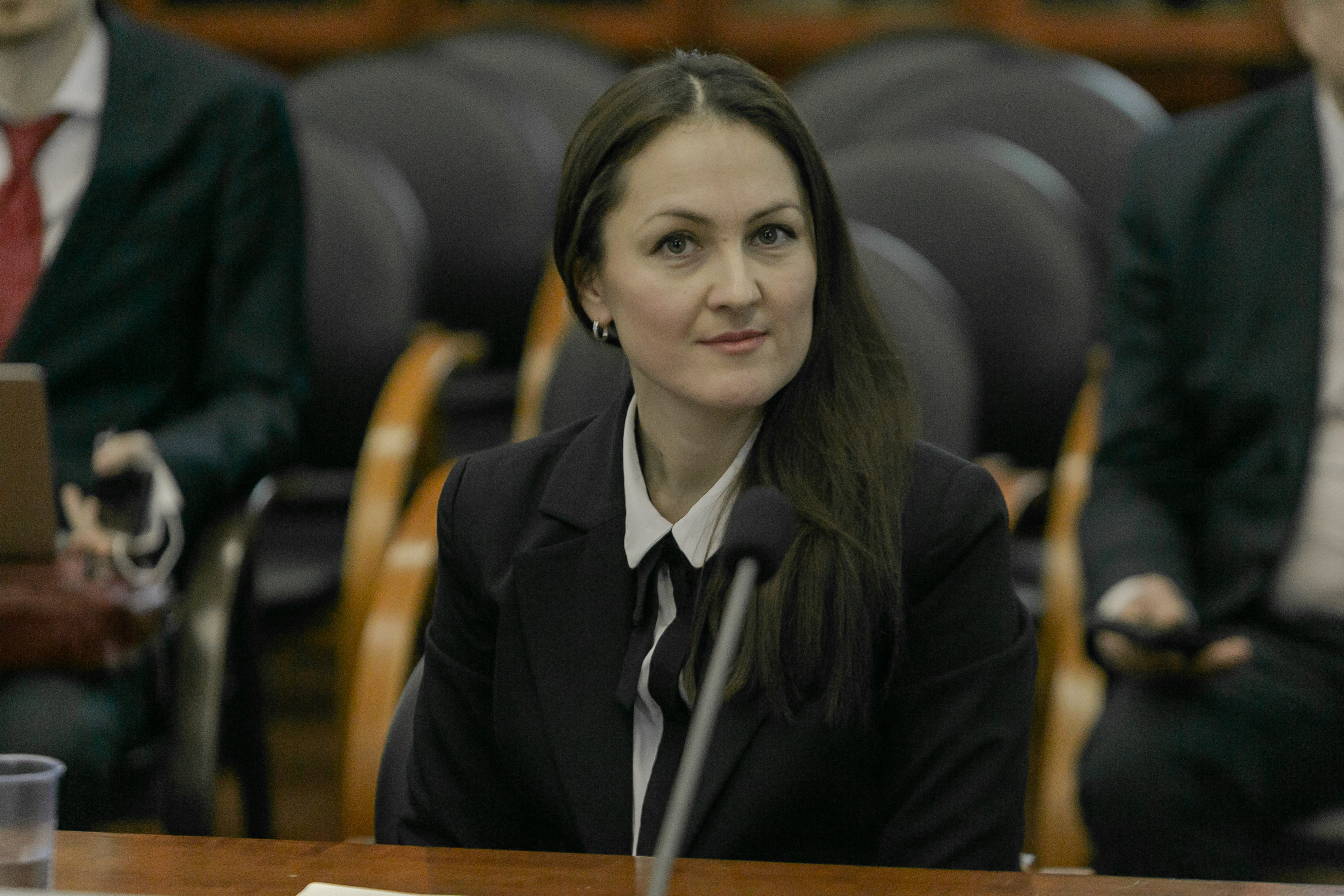 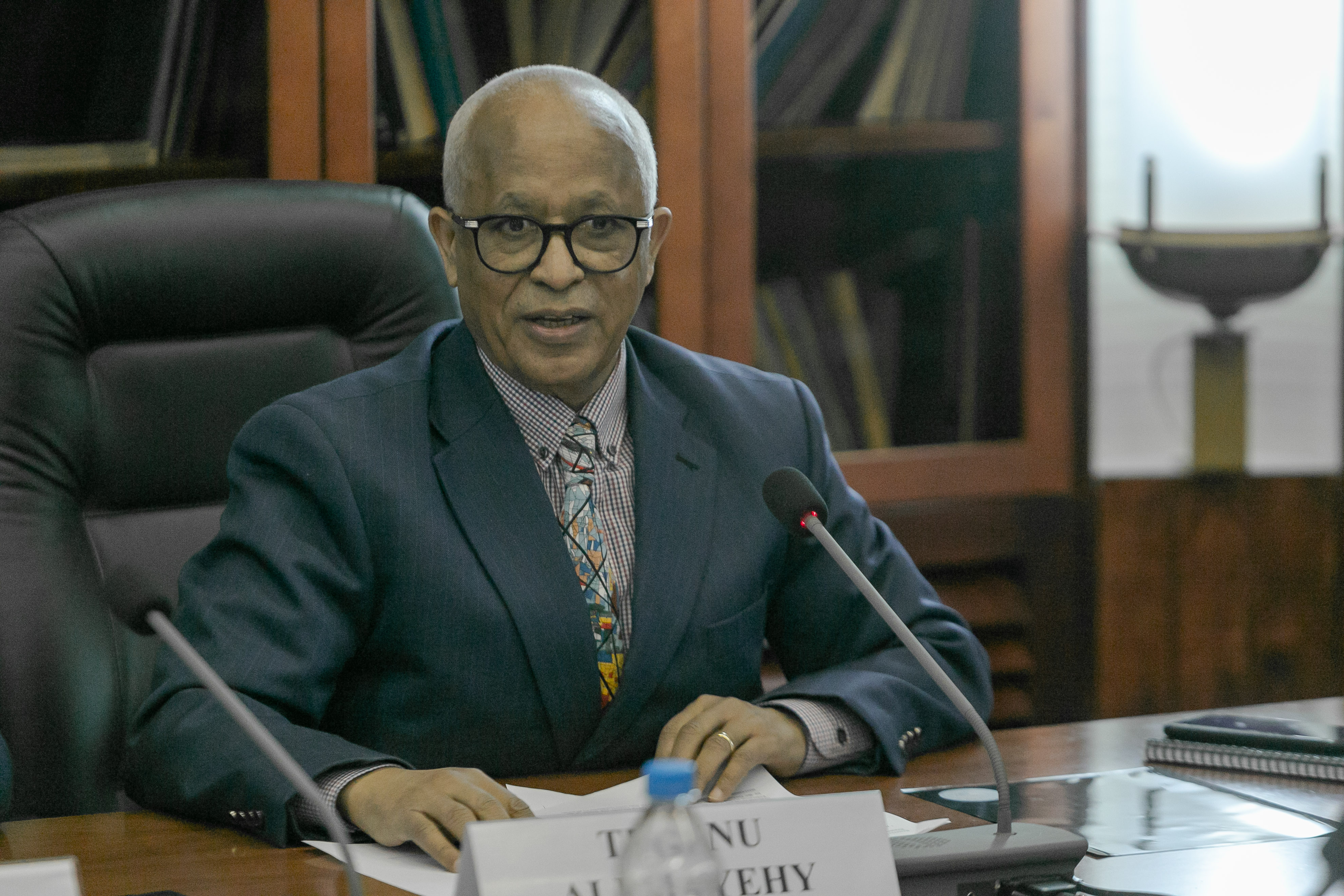 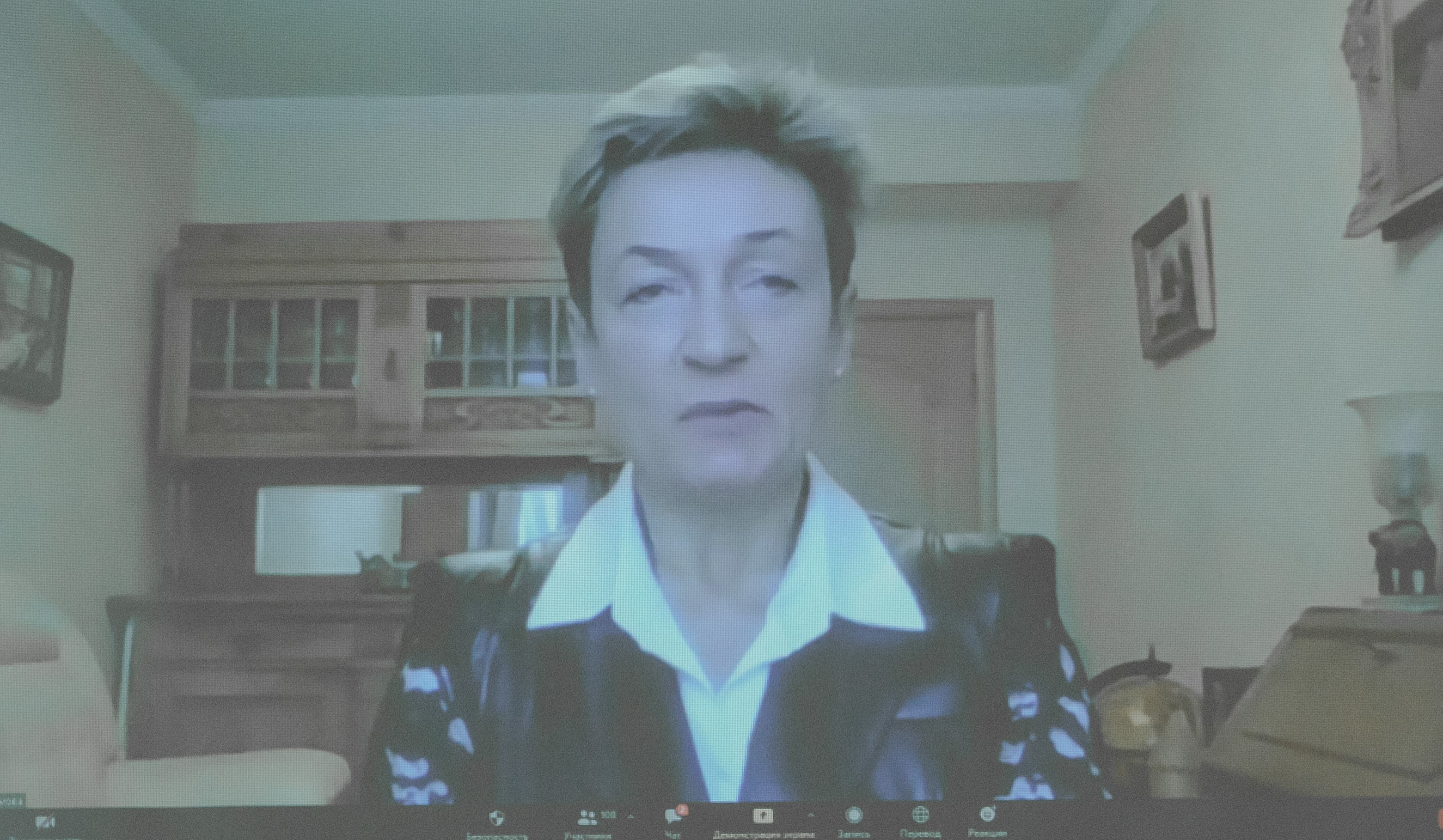 Irina Abramova, Director of Africa Institute of the Russian Academy of Sciences 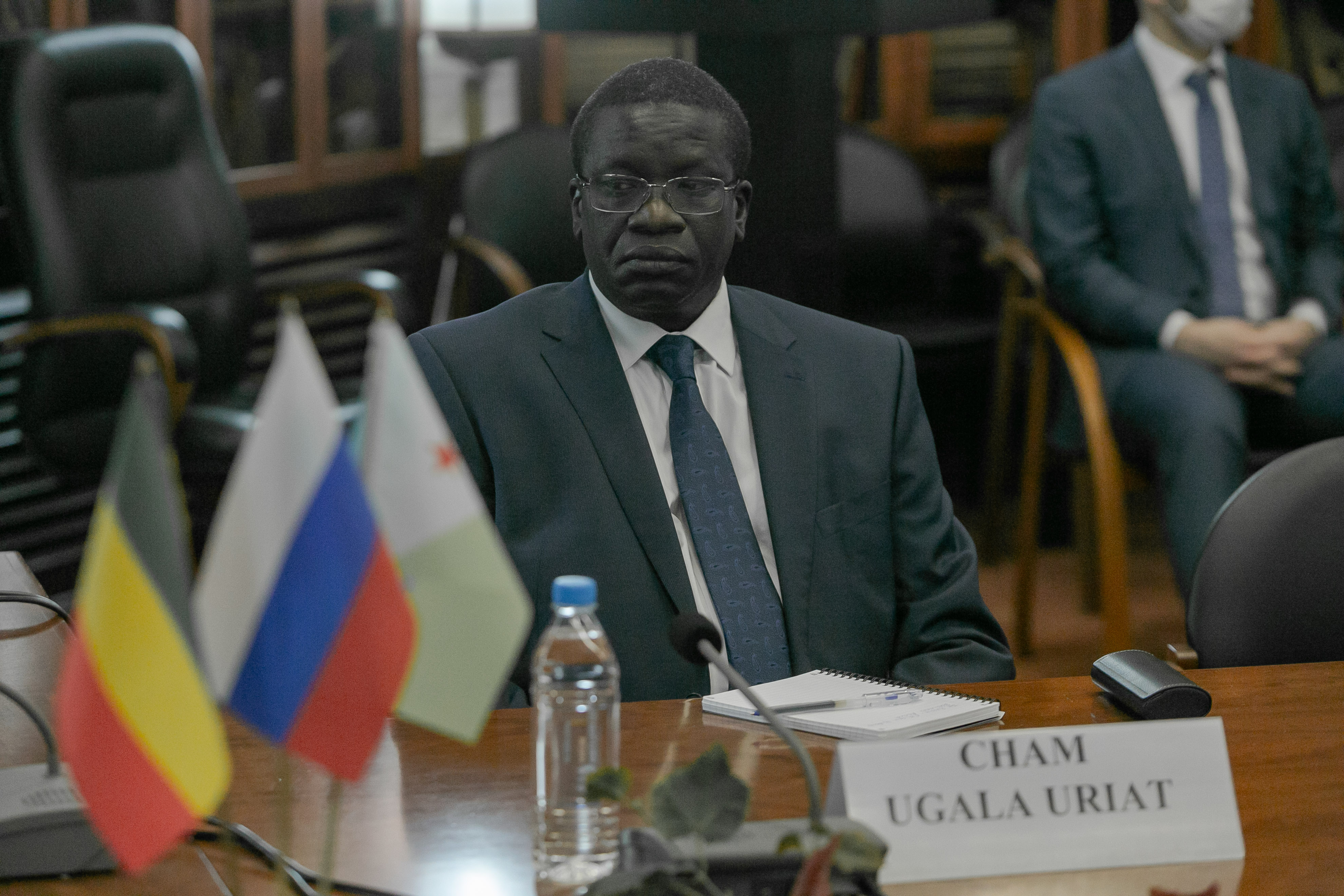 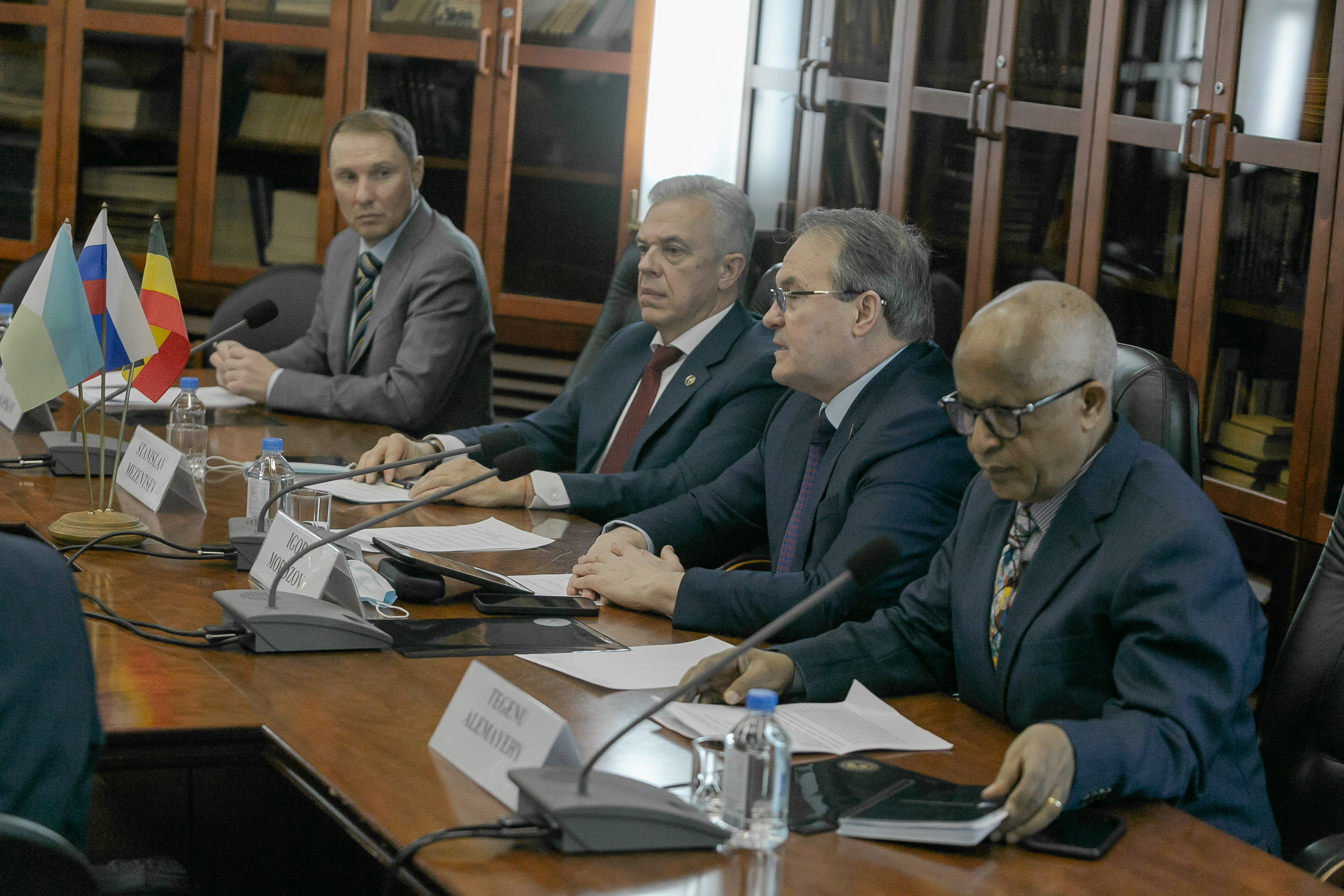 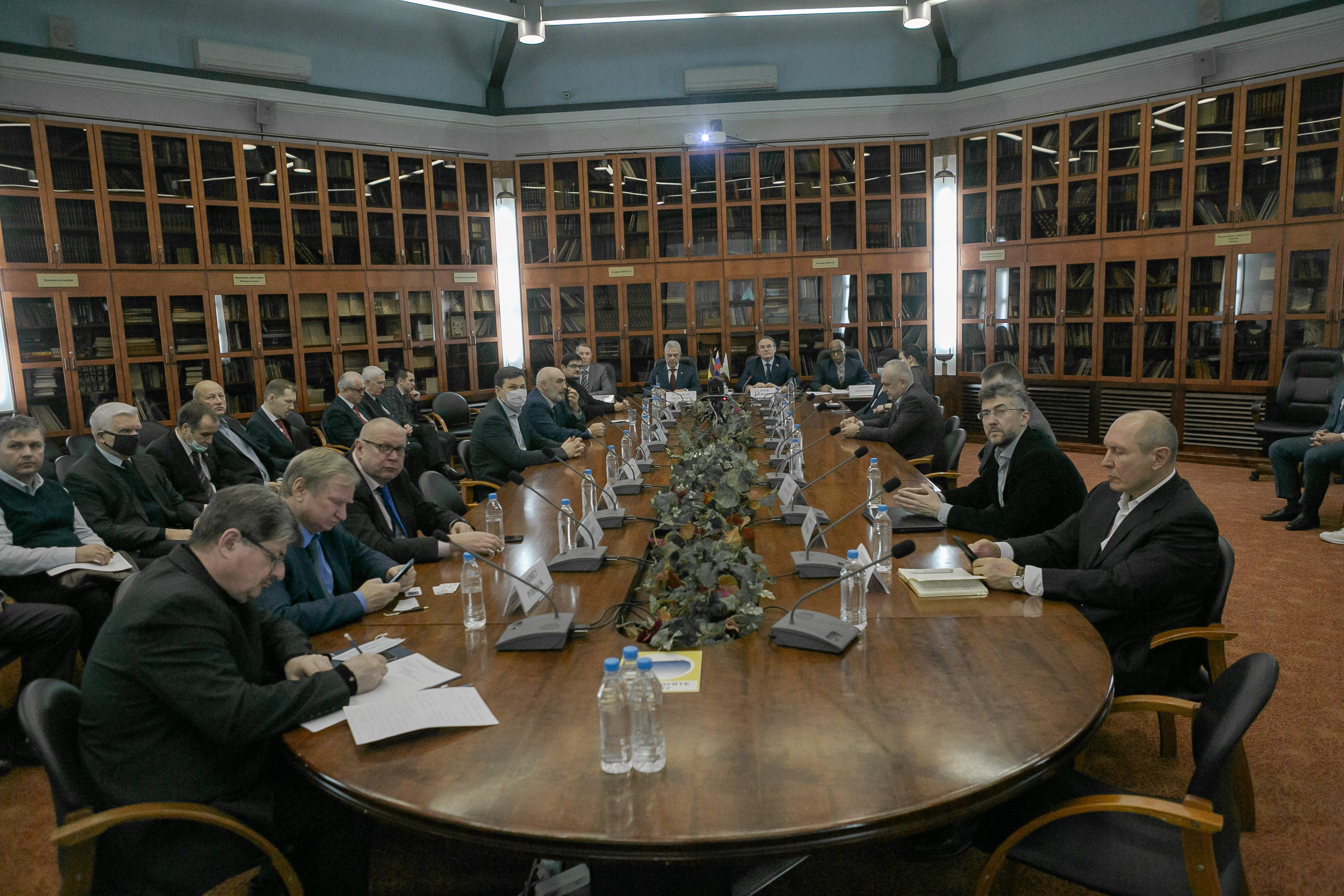 AFROCOM meeting at the Chamber of Commerce